Something everyone does in DDO at least once! 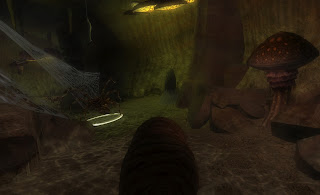 Wayfinder Dael has asked you to retrieve the Seal of Shan-To-Kor.  She believes the leader of the Cloven-jaw hobgoblins knows of its whereabouts.

Kobodls, spiders, hobgoblins... oh my.  Total deaths: 10.  It was all the spell casters throwing flame strikes around that definitely did us in.  I did manage to level up to 6 on Ricror.


Caverns of Shaagh
Defeat the leader, Hetman Shaagh, and retrieve anything that might reveal how to enter the Halls of Shan-To-Kor.

Total Deaths in our party: 6 (3 each).  Otherwise, we killed 3 Ogres, 3 Hobgoblin Witch Doctors, 2 Large Earth Elementals, 75 Hobgoblin Guards, and 1 Hetman Shaagh.  We grabbed his notes and ran.  Back to town to repair, sell, and think about how we're going to survive the Halls of Shan-To-Kor. 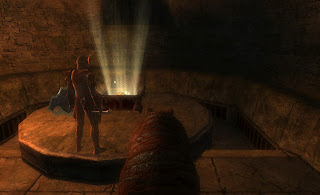 Posted by dylking at 3:11 PM No comments:

..continuing where we left off last week.

Binds of Blood
Coin Lord Amanatu sent you to stop the Sharn Syndicate's scheme to extort money from merchants by holding their families hostage.

Find and speak to Olistair Binder, the current victim of this scheme.

The Binder Home
You met Olistair Binder, who is being forced to give the Sharn Syndicate hs life savings in order to release his captive family.  Olistair would rather pay you to rescue his family than trust the Syndicate to release them.

On elite, the Binder home has some nasty traps in front of the family member's private rooms' doors.  We hired a rogue to help with that, but we still died at least once each.  We did eventually rescue the entire family, though. 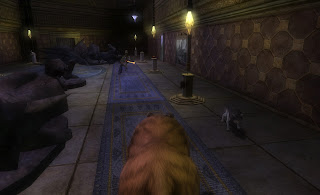 Coin Lord Amanatu sent you to appease a dragon named Kear.  He's the rightful owner of the Stormreaver Fresco, which Zircon tricked you into helping him steal.

Repossession
Kear of Argonessen, the rightful owner of the Stormreaver Fresco fragment, told you that Zircon is hiding the fresco in Goldstone Manor.

Payback time!  In addition to the Fresco, he had a bunch of other stolen artwork, which we retrieved with the help of our rogue hireling (he disabled all the traps protecting them)  Oh, and we kicked Zircon's butt, too.  You returned the Fresco to Kear of Argonessen and cleared your name.

Come Out and Slay
Madhand Julvaney told you that the Sharn Syndicate has a set up a meeting to unite all the gangs of Stormreach.  He wants you to infiltrate this meeting and assassinate the Syndicate representative.  The meeting will take place at the Tenements.

We managed to forge an alliance with one of the local gang leaders, so when we put the smack down on Talon, we'd have at least a little muscle.  Even with his help, we died a few times - Elite is NOT a cakewalk through the Tenements (at least not on-level and duo).  We were victorious, however!

Coin Lord Amanatu wants to destroy the Sharn Syndicate's presence in Stormreach. If you want to help with this undertaking, Yorrick Amanatu has tasks for you in the Marketplace.

Slab
The Sharn Syndicate underlord, Slab the Crusher, is trying to acquire a base in Stormreach to run his illicit operations from.  However, Coin Lord Amanatu does not want the Sharn Syndicate here and has asked you to stop this.

Slab is currently trying to acquire a building from the Statler brothers, in the southwest part of the Marketplace.

Stand Your Ground
When you heard Maxwell Statler's drunken lament of how the Sharn Syndicate is coming to take his beloved  saloon away, you offered to help him and his brother fight them.

These two quests are tied together, obviously.  We defended the brothers, drove off Slab, and made them quite happy.  Maxwell is now free to pursue his dream of owning a grand saloon in Stormreach.

Dirty Laundry
Guard Kayd told you that the Shiny Shilling is a money laundering front for the Sharn Syndicate.  (in case you forgot in the last 3 minutes)  The Stormreach Guard won't act directly, but Guard Kayd wants you to go in and deal with any illicit activities inside.

Not a problem, even on elite - we even opened the strongroom without alerting the guards :)

Continuing in our elite trek through the Marketplace... 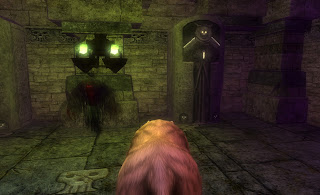 Following the Archbishop's instructions, you broke into the Patriarchs' Crypt and successfully warded the unbroken sarcophagi against Marguerite.  Just as you warded the last of the graves, Marguerite herself appeared, with an army of her undead minions, and you were forced to flee the Crypt.  Still, Marguerite's power will be severly limited from now on.  Now, someone must confront her directly...

..and guess who that 'someone' is?

And now it all comes down to this:

Archbishop's Daughter
Archbishop Dryden is saved, by your hand.  He had been possessed by the spirit of his uncle, Arkasic, but in the end he forced the wraith from his body for you to slay.  Marguerite, it seems, wanted nothing more than vengeance on her father.  Now that you have destroyed Arkasic's spirit, she has given up the corrupt power of the Duality and her spirit is free.  Friar Renau has praised you as a hero, through you will probably remain an unsung one, since the Church wishes to keep this incident quiet... 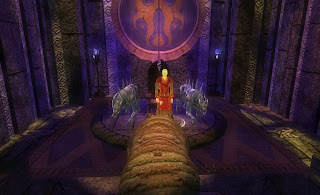 Of course they do - wouldn't want the public to know one of their most public Archbishops had been possessed!

Anyway, off to see what other rights need to be wronged!

Continuing where we left off last night...

To Find a Witness
Chapter 1: Archbishop Dryden
At the request of Friar Renau, you informed Archbishop Dryden that the Sanctuary has been overrun by undead and his daughter is missing. Dryden immediately sent you back to the Sanctuary to search for survivors...
Chapter 2: Return to the Sanctuary
Using the master key supplied by Archbishop Dryden, you gained access to the previously inaccessible areas of the Sanctuary. In Minon's Ward, a wing dedicated to the most irredeemable cases, you found a single survivor, a madman named Fitzwood, who insisted he saw Marguerite commanding the undead who attacked the Sanctuary, and that she has learned to use a power he called "The Duality". Dryden then suggested you continue your search for answers in the Archives located deeper in the Catacombs.

Duality
Chapter 1: The Old Archives
Archbishop Dryden sent you to the Library Archives to search for a book about "The Duality", written by Dryden's uncle, Gerard.  You discovered that the Archives have also been overrun by undead, and the librarians have been slaughtered.  You were able to locate pieces of the book, but details about the Duality are apparently forbidden, and may be found at the author's grave...
Chapter 2: The Crypt of Gerard Dryden
At last, you have discovered the truth about the mysterious "Duality".  A corruption of the faith of the Silver Flame, the Duality calls upon the power of the Devourer, one of the Dark Six.  The Duality also promises power 'over the living and the dead' and requires the mortal remains of one strong in the faith of the Flame.  It seems apparent that Marguerite Dryden has tapped into this power and used it to raise the undead that now infest the Catacombs.  All that remains is to find a way to stop her... 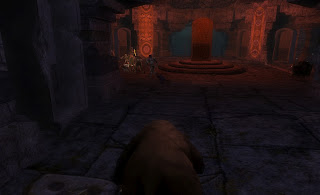 And we stopped here for the day.  This is one of the first chains in DDO that tells a very compelling story, in my opinion - it's pretty fun being a part of it!

Posted by dylking at 1:42 PM No comments:

(Ricror) Elite Waterworks and others

Ricror and Snaris headed into the WaterWorks today, doing everything possible on Elite.

Chapter 1: The Kobold's Den
You found Arlos ar-Kerran and freed him from Clan Gnashtooth's prison.  Arlos then revealed that is brother, Venn, was captured by the Clan Tunnelworm kobolds.

Chapter 2: Venn's Trail
You tracked Venn ar-Kerran to the Clan Tunnelworm prison.  Though the Tunnelworm kobolds killed him before you arrived, you extracted revenge for Venn's family.

After that, we headed over to the Cerulean Hills.  Although we were over level for the area, there were still a couple of quests we could do without penalty.

Where's There's Smoke...
Orcs are preparing to burn Nash Braza's farmstead to the ground.  Slay the orcs and save Nash's farm from a firey ruin.

That we did - and we saved the farmhounds too!

The Captives
Orcs from the Grul tribe have taken Lady Azdel and her bodyguards captive.  Travel to the Grul tribe outpost to the east of the Cerulean Hills and free the captives.

Piece of cake! (Well, mostly - some of those orcs hit hard!)

After that, we returned to Stormreach and began The Catacombs series.  Lots and lots of undead to play with here.

Friar Renau, a priest of the Silver Flame, asked you to check on his niece, Marguerite, who lives in the asylum known as the Sanctuary.  Upon entering the Sanctuary, you found that the place had been overrun by undead, and the inhabitants slaughtered.  A note in Marguertie's cell suggested she may have escaped the carnage by going 'below'.


At this point we called it a night.  We did manage to each level up, and we leveled the Guild as well - we're now Rank 16.  20 is where all the good stuff happens :)